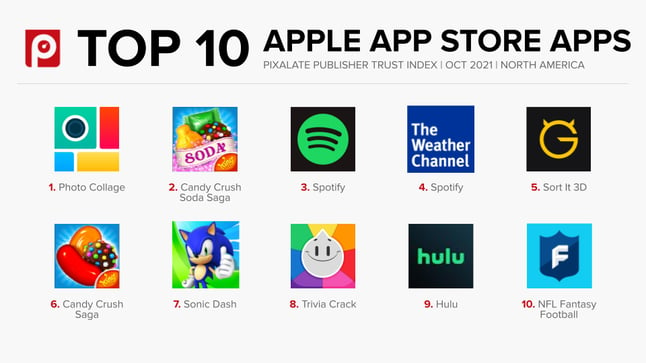 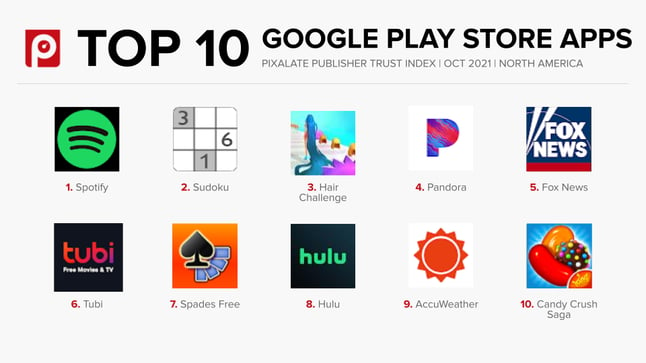 Hulu has remained the leader of both Pixalate’s CTV Publisher Trust Indexes in October 2021 in North America. The app performed remarkably across all measured metrics, particularly in Amazon Fire TV ranking, where Hulu scored over 90 across all categories. It is also worth highlighting that Hulu has maintained a low risk of potential Invalid Traffic (IVT) and ID Spoofing and is the firm leader of estimated ad spend among all CTV apps on both Roku and Amazon Fire TV platforms.

However, Hulu is not the only quality CTV app. Behind the leader, there is fierce competition among apps aiming to dethrone Hulu. discovery+ is one of them, frequently appearing in the top 10 of the Roku ranking of the best quality apps for advertisers. In addition, the app has the largest estimated reach among all apps present in the Amazon Fire TV store, being close to 27 million users per month. discovery+ also performed well across all measured metrics, including high scores in the IVT and Engagement categories. Moreover, discovery+ indicated low description risks potentially harmful to Brand Safety.

SlingTV is one of them. The app obtained two top 5 spots in October, including maintaining the runner-up position in the Roku ranking. SlingTV scored impressively across all measured metrics, including a 95 score in the Ad Density category. The channel aggregator also indicated low general risk scores both globally and in North America.