Gray Television extended the lead with the most quality CTV apps for advertisers among public companies: October 2021 update

Gray Television (GTN) remained the leader of publicly traded companies owning the most significant number of high-quality CTV apps for advertisers, based on Pixalate’s analysis of the Publisher Trust Indexes for Roku and Amazon Fire TV platforms in October 2021 in North America.

The rise from 23 in September to 30 in October was the most significant among all publicly traded companies owning CTV apps ranked in the top 100 of the CTV Publisher Trust Indexes. Gray Television achieved it by improving programmatic advertising quality in their portfolio of local news TV channels, including WSAZ, WKYT News, and WITN News. 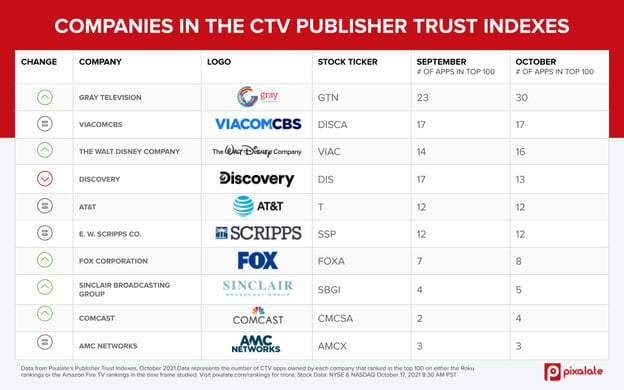 ViacomCBS and The Walt Disney Company at the podium

ViacomCBS (VIAC) and The Walt Disney Company (DIS) obtained the second and third positions in the ranking with 17* and 16 apps, respectively.

For ViacomCBS, the number of apps in the CTV Publisher Trust Indexes remained the same as in September. There are channels in the company’s portfolio, such as MTV, VH1, and Comedy Central.

On the other hand, The Walt Disney Company narrowed the gap between them and ViacomCBS and had two more apps in the October CTV Publisher Trust Indexes than in September. Hulu, ABC News, and ESPN are some of the most popular channels owned by the company.

*Two apps are co-owned 50/50 by ViacomCBS and AT&T and were included in the count of both companies.