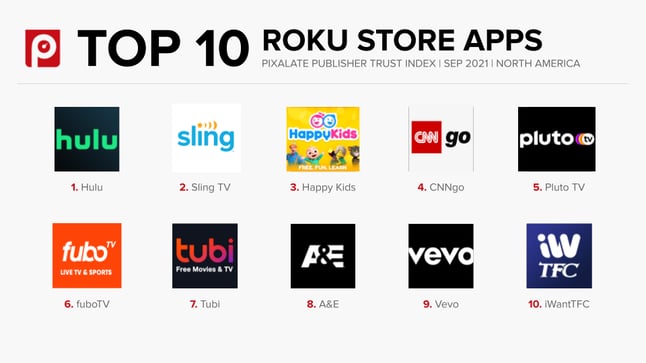 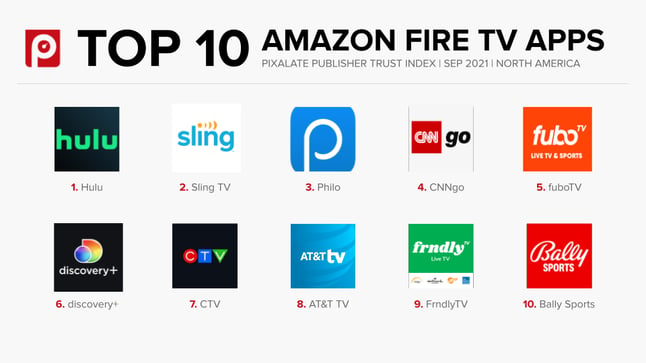 Hulu once again led the CTV Publisher Trust Indexes in North America, this time for the September 2021 rankings. Sling TV reached the No. 2 position in both the Roku and Amazon Fire TV indexes.

Hulu achieved both No. 1 positions by remarkable results across all measured metrics. The app obtained the highest possible score of 99 in the Ad Density and Popularity categories in both rankings. Moreover, with an estimated monthly reach of up to 22 million users, Hulu indicated lower overall potential for invalid traffic (IVT) advertising risks.

Sling TV also performed well across all measured metrics and was closely behind Hulu in both September CTV rankings. The app obtained the highest possible mark (“A”) across all categories, except for Engagement, in both classifications. Furthermore, Sling TV indicated low brand safety description risks across all measured categories.

fuboTV constantly appears in the top 10 of the CTV Publisher Trust Index, and September was not different. fuboTV obtained top 10 positions on both Roku and Amazon Fire TV rankings by excellent performance across all measured metrics, particularly Popularity and Engagement. The app also indicated a low advertising risk score in North America and globally.