Gray Television again with the most quality CTV apps for advertisers among public companies: September 2021 update

Gray Television (GTN) again became the leader of publicly traded companies owning the largest number of high-quality CTV apps for advertisers, based on Pixalate's analysis of the Publisher Trust Indexes for Roku and Amazon Fire TV platforms in September 2021.

Gray Television noted a significant increase in the number of apps included in the CTV Publisher Trust Index. With 23 apps among the top 100 in September, Gray Television regained the top spot among publicly traded companies. In June, Gray Television was also the ranking leader before losing the lead in July and August.

The number of apps belonging to Gray Television rose from 10 in August to 23 in September. Interestingly, all of the company's apps reached the top 100 of the Amazon Fire TV Publisher Trust Index, with none in Roku's ranking. In Gray Television's portfolio, we can find a range of local TV stations, including WAFB+ and WMBF News. 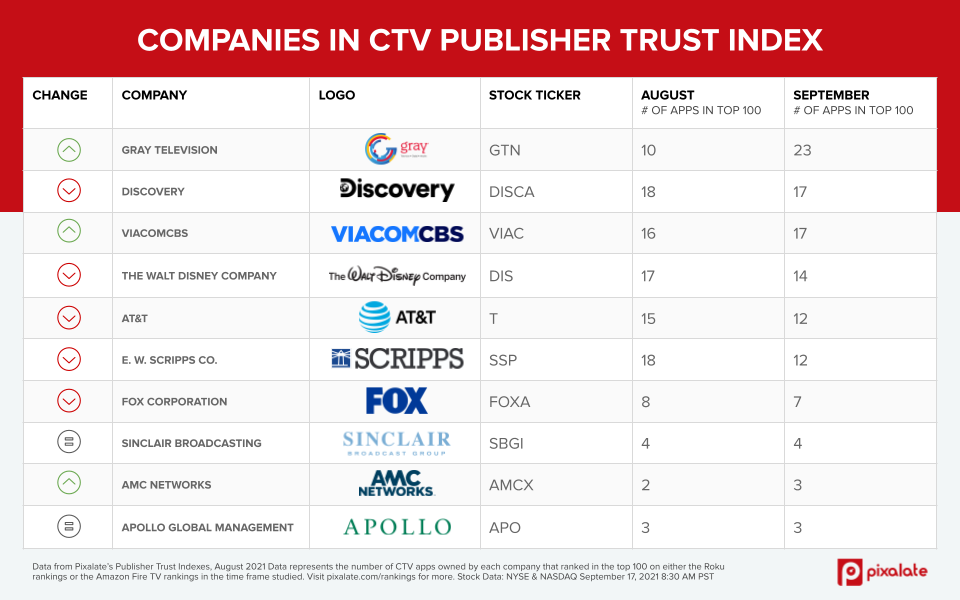 Even though 17 apps could give the lead in some months, Discovery (DISCA) and ViacomCBS (VIAC) tied for the second position among publicly traded companies owning the most apps in the CTV Publisher Trust Indexes.

*Two apps are co-owned 50/50 by ViacomCBS and AT&T and were included in the count of both companies.