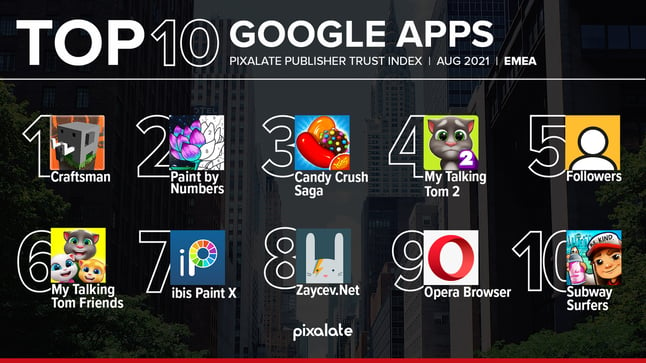 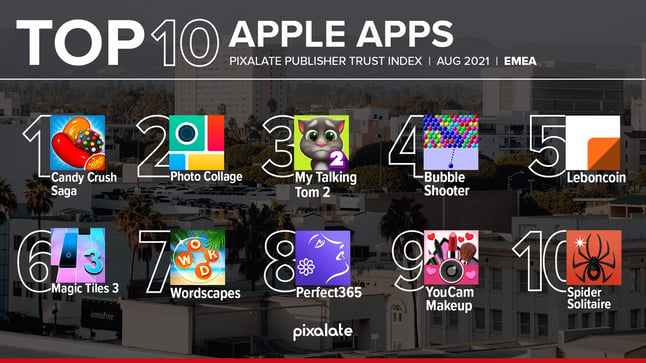 After being on the podium of EMEA Google Play Store ranking since the launch of the Publisher Trust Index in April 2021, Craftsman: Building Craft took the top position for the first time. The app performed remarkably well and earned the highest possible mark (“A”) across all measured metrics, including Invalid Traffic (IVT), Brand Safety, and Permission Score. Moreover, Craftsman indicated lower risks across all categories in Description Brand Safety.

Candy Crush Saga debuted in the top 10 of the EMEA Apple App Store Publisher Trust Index by leading the August ranking. The app’s results were extraordinary, and Candy Crush Saga scored at least 90 across all measured metrics, including 95 in Ads.Txt and 99 in Viewability Scores. In addition, in the Traffic Trends section, Candy Crush Saga posed a lower risk of potential IVT risks across all categories.

There are more quality EMEA apps for advertisers

One of them is My Talking Tom 2. Along with Candy Crush Saga, My Talking Tom 2 is the only app achieving the top 5 of both EMEA mobile Publisher Trust Indexes. My Talking Tom 2 also performed well across all measured qualitative metrics. With an estimated 33 million monthly reach, the app offers est. 1.19 billion impressions available programmatically.