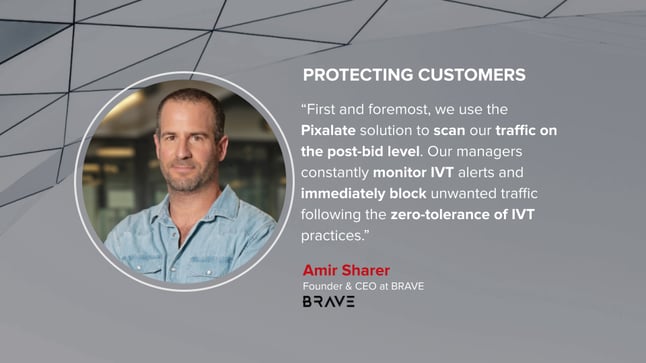 Amir Sharer is Founder & CEO at Brave, married to Rebecca, father to Aimee and Leo. Amir is an entrepreneur and a big data expert.

Before he founded Brave, Amir spent time in both digital marketing and E-Commerce companies.

Apart from Brave, Amir is a mentor at Momentum Acceleration, a startup accelerator that invests in a wide range of early-stage ventures twice a year. He is also a board member of a few startup companies.

Pixalate: What services does BRAVE offer?

Brave’s goal is to provide the most direct link between media buyers and sellers to ensure quality and transparency. The company works with hundreds of buyers and more than 1,000 publishers worldwide.

Pixalate: How does BRAVE protect its customers from invalid traffic (IVT) and ad fraud?

Amir Sharer: We protect our customers with a multi-layer set of practices focused both on prevention and post-factum track and block practices.

First and foremost, we use the Pixalate solution to scan our traffic on the post-bid level. Our managers constantly monitor IVT alerts and immediately block unwanted traffic following the zero-tolerance of IVT practices. Other managers review the best practices recommended by the top anti-fraud associations and follow the recommendations. Our system has a protection layer for obvious fraud such as multi-clicks, fast-clicks, and suspicious activity of the users. 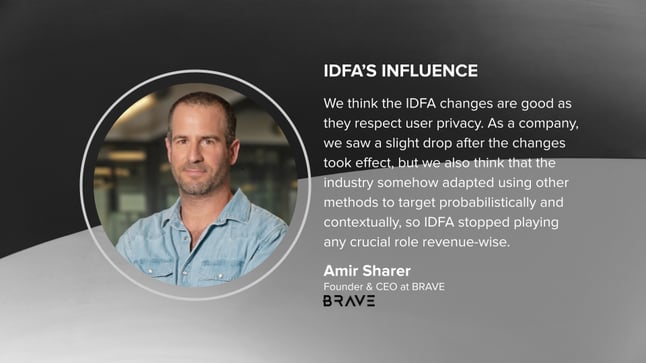 Amir Sharer: We think the IDFA changes are good as they respect user privacy. As a company, we saw a slight drop after the changes took effect, but we also think that the industry somehow adapted using other methods to target probabilistically and contextually, so IDFA stopped playing any crucial role revenue-wise.

Pixalate: How does the user engagement differ between the display and video mobile in-app programmatic advertising?

Amir Sharer: We can surely and honestly say that in-app is all about performance. Due to the interaction and screen time of the users, it’s easier to attribute and convert on the in-app mobile video. The rewarded video format is also a huge deal nowadays. Some users are thrilled to engage with that type of content. The display is more intense - meaning that display users (based on public research) tend to view more ads than on the mobile. However, the engagement rate is also lower.

Pixalate: What area do advertisers need more education on as it relates to programmatic mobile advertising?

Pixalate: Which trends, policies, and initiatives do you consider as possibly the most influential on the future of programmatic advertising?

Amir Sharer: Everything related to data privacy. Also, we do think that the IAB and MRC initiatives are critical.