Welcome to Pixalate’s CTV & Mobile App Manual Reviews According to COPPA, a series containing the detailed factors the Trust & Safety Advisory Board educators used to assess an app’s child-directedness.

The educators manually review thousands of mobile apps available in the Google Play & Apple App Stores as well as connected TV (CTV) apps from the Roku Channel Store and Amazon Fire TV App Store using the COPPA Rule factors shown below & make those results available to the public at ratings.pixalate.com.

This post takes a look at a popular CTV app from the Amazon Fire TV App store and the Roku Channel Store. Our reviewer discusses how the subjective factors set forth in the COPPA Rule apply to the app and factor into the reviewer's determination as to whether the app is child-directed or general audience (i.e., it is not targeting children).

This app brings the classic children’s show, Sesame Street, to a new generation that is being raised on streaming, rather than live TV. The app does not play full episodes, but rather short videos that are more aligned with much of the popular children’s programming today. The app is easy for children to navigate, with thumbnails of each character that children can select to explore videos featuring those characters. After the selected video finishes, it will automatically continue to the next one so that children can continue to watch without parents needing to start the next video for them. Many of the videos contain some type of song to help engage children and encourage learning.

While most of the videos feature the classic Sesame Street puppets, there are several animated options. These clips feature animated versions of the beloved, classic characters such as Big Bird and Elmo. There are also several videos that combine animated backgrounds or other features, alongside the puppets. While Big Bird, Elmo, and many of the other Sesame Street characters could be considered celebrities themselves, many of the videos also feature celebrities that both parents and children will recognize. Additionally, many of the non-animated videos also feature child actors alongside the puppets.

The homescreen of the app is organized with sections for videos featuring different characters, songs, and ABCs. There is also a “Learning Area” screen where parents can launch videos centered around Art, Emotional Development, Health, Literacy, Math, Science, and Social Development. These sections reflect the app’s description of, “educational videos [that] were designed to teach your child school readiness skills while delivering on Sesame Workshop’s mission to help kids grow smarter, stronger, and kinder.” This description indicates that the intended audience of this app is children. The way the characters speak within the videos is reflective of the vocabulary of younger children.

Throughout the videos there are references meant to entertain parents that likely would go over most children’s heads. A great example of this is the Game of Chairs video in which Grover conducts a musical chairs game to determine who will rule over Jesteros (complete with a Mommy of Dragons and other puppet versions of your favorite Game of Thrones characters). Despite these parodies and references, I cannot imagine that any adult would sit and watch this without their children around, leading me to a Child Directed rating rather than a Mixed Audience rating.

Roku has this app listed under “Kids & Family” while Amazon has this app rated as “Guidance Suggested.” According to Amazon this means “the content of this application has material that is appropriate for most users” but it may include “include account creation, location detection, user generated content, advertisements, infrequent or mild references to violence, profanity, or crude themes, or other content not suitable for all ages.” This app does not contain any advertisements or user generated content and the content is generally clean and child friendly. There is an optional section to sign in with a Sesame Street account but I was never prompted to create one in the app.
Roku does not collect written reviews about apps but reviews on Amazon are mostly from parents writing about how their children are using the app. Some reviewers even mention children as young as 10 months old.

According to the Sesame Workshop Privacy Policy, they work to ensure they are COPPA compliant. Their privacy policy, which covers more than just this single app, indicates that many of their content and features do not require any personal information to be submitted or collected. The only information they may collect is e-mails for parent newsletters or if a user chooses to share content with a friend, in which case they do not keep the information after emailing the requested content. They do collect anonymous analytical data that is not tied to specific users.

Screenshots of Lea and Pop- Baby songs and cartoons for kids: 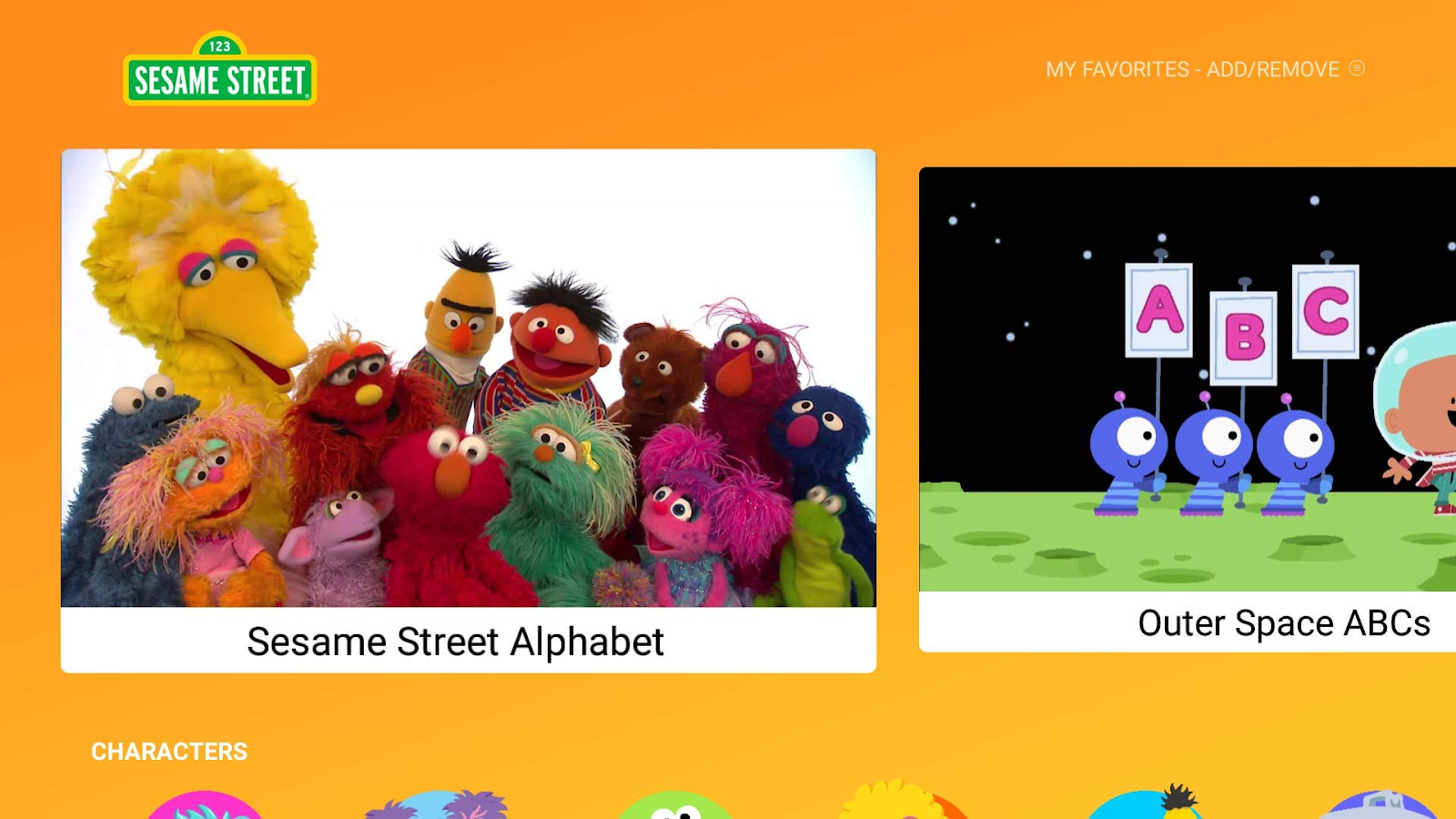 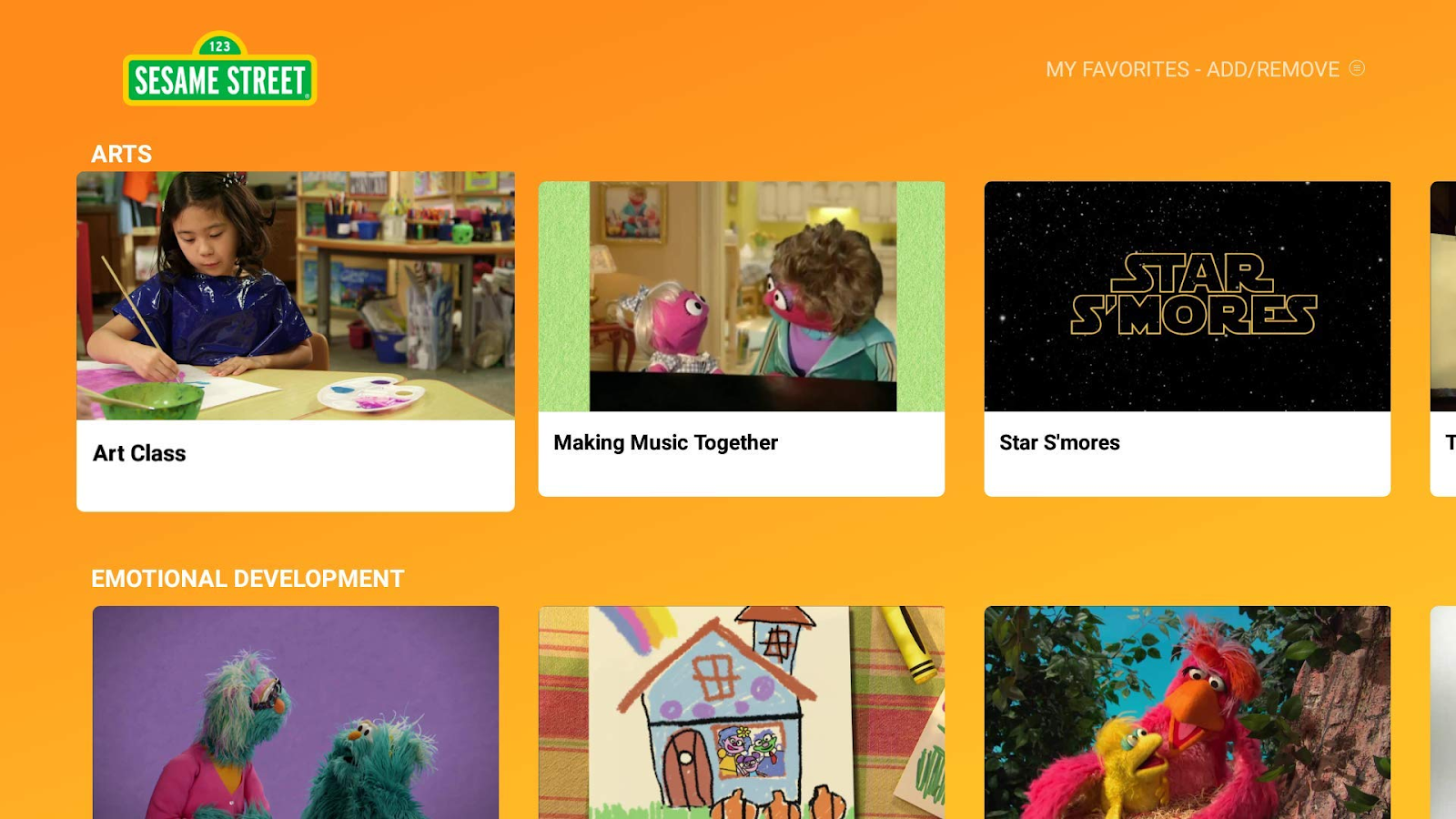 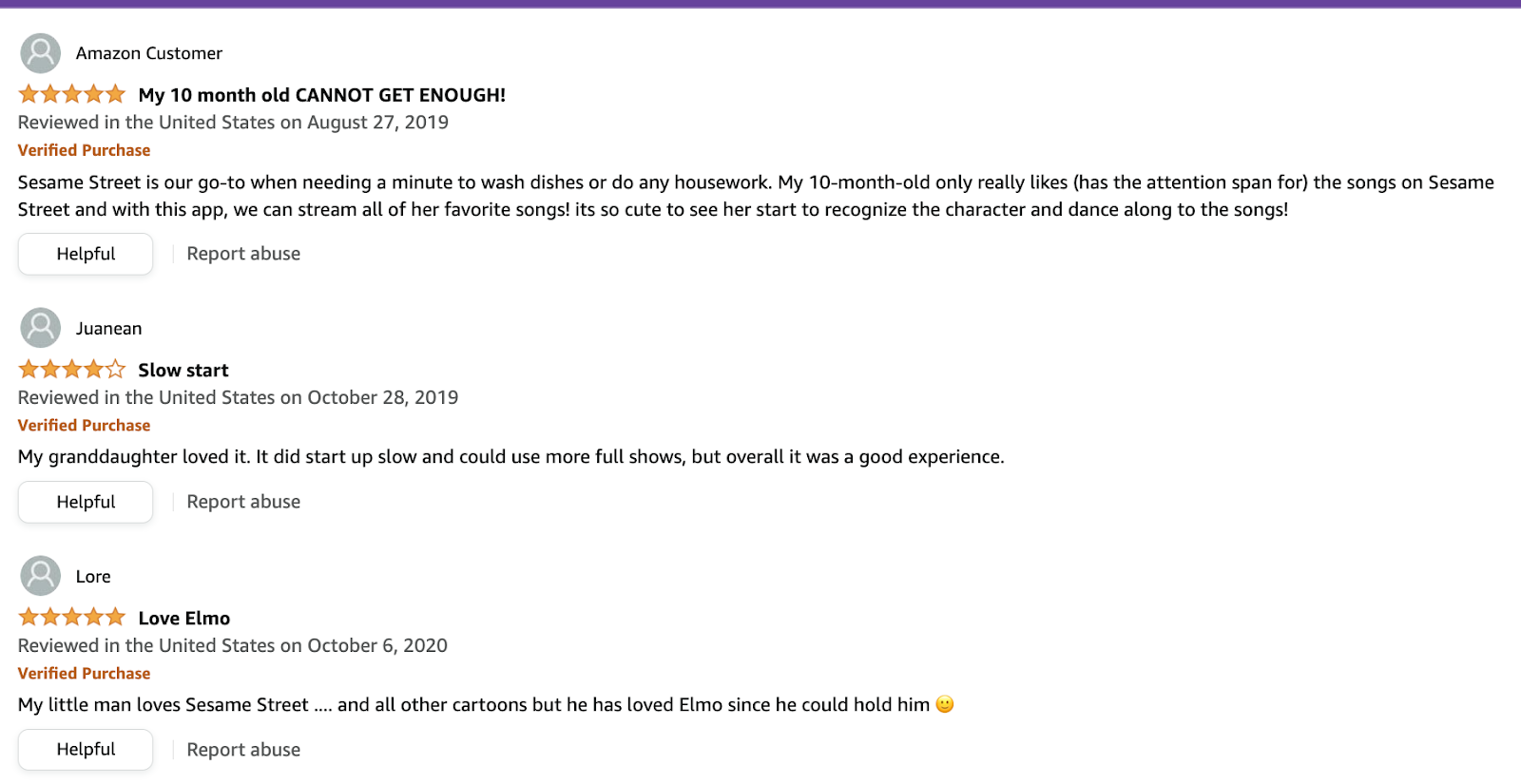