SlingTV and Hulu reach the top of CTV Publisher Trust Indexes, CBC Gem debuts in the top 10 in the FireOS classification 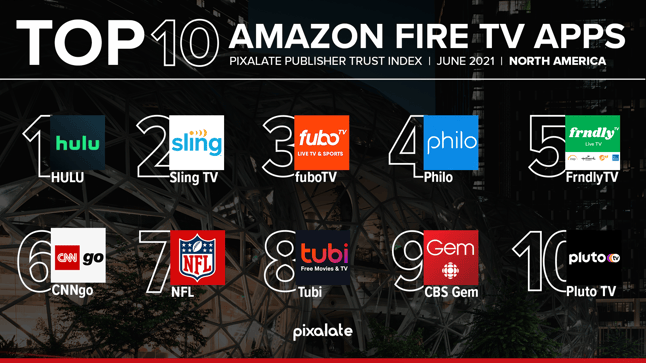 Hulu remained at the top of Roku ranking

Hulu maintained almost perfect ad quality from May and scored exactly the same as it did last month to remain at the top of Amazon Fire TV ranking. It is worth mentioning that the app scored at least 96 in all measured metrics, including a perfect 99 in three categories - Popularity, Ad Density, and User Engagement.

SlingTV dethroned Hulu from the first place in Roku ranking by achieving the highest grade, “A”, across all metrics. The consistent and excellent performance allowed the app to rise from the second spot last month to the top. It’s worth noting that SlingTV obtained the highest score (96) among the top 10 apps in the Invalid Traffic category.

CBC Gem debuted in the top 10 best quality CTV apps for advertisers in June in Amazon Fire TV ranking. After reaching the 38th position in May, the app visibly improved its Popularity and Engagement metrics scores to achieve A’s in all measured categories. Thanks to improvements, CBC Gem earned 9th place in June’s edition of the Publisher Trust Index.

Previous Story
← Pixalate Week in Review: July 12 - 16, 2021
Next Story
MyRadar and The Weather Channel at the top of June’s Google Play and App Store indexes, Words With Friends 2 among the best five apps of both rankings →