Apps delisted in Q3 2022 had over 108 million user ratings prior to delisting, but the majority of them (81%) had no detected app country of registry. From Q1-Q3 2022, Google and Apple combined have delisted over 1.1 million apps.

Apple and Google have an important role to play in protecting consumers’ online privacy, part of which is setting and maintaining consumer privacy standards across the 5.1 million apps available for download in their stores. While removing apps from a store prevents future downloads, those apps can remain installed on users’ devices and continue to collect personal information. In Q3 2022, Pixalate found 13% of the delisted apps had no detected privacy policy despite the fact that 35% of delisted apps requested personal info access via sensitive permissions, posing a potential opportunity for unchecked consumer tracking. 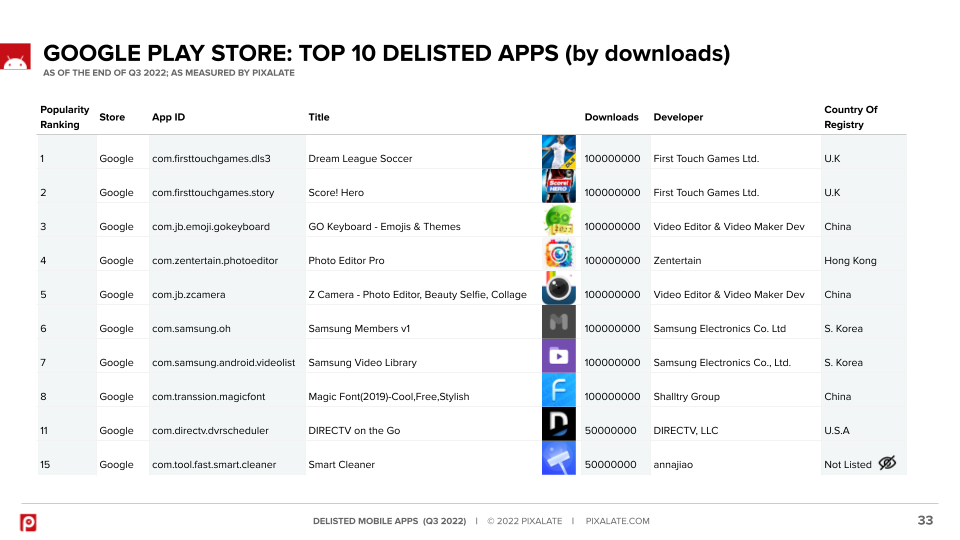 The graphic above shows the top 10 most popular apps delisted from the Google Play Store in Q3 2022, and you can download the full report as well as a list of the top 1,000 most popular delisted apps from each app store here.

What’s inside the report

Download a copy of the Q3 2022 Delisted Mobile Apps Report for free here. You will also be provided with a list of the top 1,000 most popular apps that were delisted in Q3 2022.

Disclaimer
The content of this press release, and the Q3 2022 Delisted Mobile Apps Report (the “Report”), reflect Pixalate’s opinions with respect to the factors that Pixalate believes can be useful to the digital media industry. Pixalate’s opinions are just that, opinions, which means that they are neither facts nor guarantees; and neither this press release nor the Report are intended to impugn the standing or reputation of any entity, person or app, but instead, to report findings and trends pertaining to apps delisted from the official Apple App Store and Google Play Store.