AT&T with the most quality apps for advertisers in the North America CTV Publisher Trust Indexes: November update

AT&T (T) reached the top spot among publicly traded companies owning the best quality apps for advertisers in the CTV Publisher Trust Indexes in North America, based on the Roku and Amazon Fire TV rankings analysis in November 2021. Since October, AT&T increased the number of apps classified in the CTV Publisher Trust Index from 8 to 9. There are apps such as CNNgo, Watch TBS, and Watch TNT in the company's portfolio.

Closely behind AT&T in the November ranking, ViacomCBS (VIAC) had eight apps. The leader of the October ranking had two fewer apps in October, which allowed the company to secure the second position. ViacomCBS owns many well-known apps, such as VH1, MTV, Paramount +.

Interestingly, ViacomCBS and AT&T are the only publicly traded companies co-owning an app ranked in the CTV Publisher Trust Indexes. The CW Network is the CTV apps developer owned 50/50 by both companies, and Pixalate includes its apps in both companies' counts. 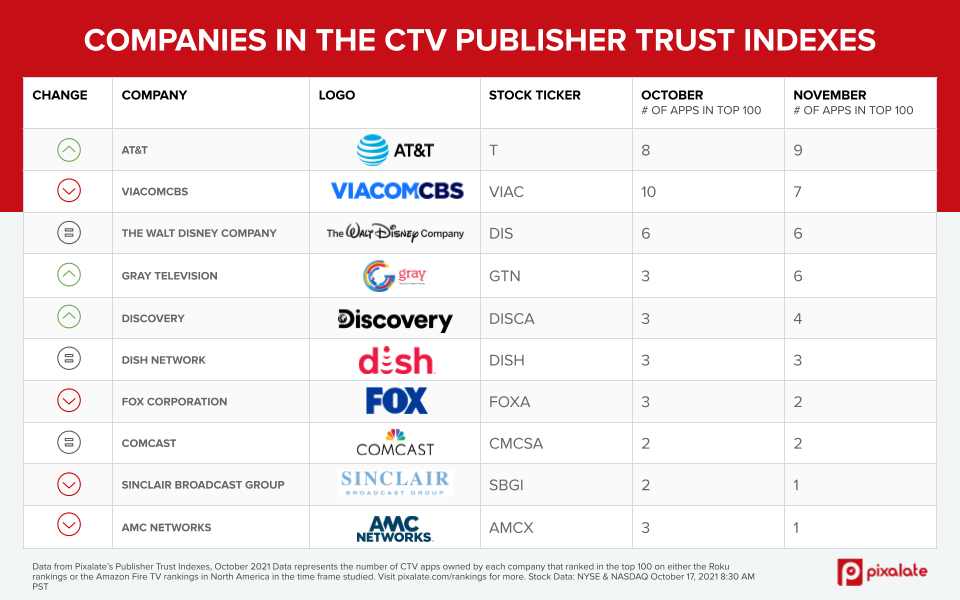 Gray Television (GTN) and The Walt Disney Company (DIS) were ex aequo at the third place of the podium with 6. Since October, Gray Television increased the number of apps ranked in the CTV Publisher Trust Indexes by three, while Disney maintained six apps in both rankings.

What's worth noting, the number of apps ranked in the CTV Publisher Trust Indexes and owned by publicly traded companies significantly differs between North America and Global Indexes. In October, there were 130 apps in Global CTV Indexes owned by publicly traded companies, while for North America, it was just 50 (35 in Amazon Fire TV, 15 in Roku rankings). Pixalate will continue to monitor this trend in the future.

European Union passes Digital Service Act – what will this mean for global publishers?