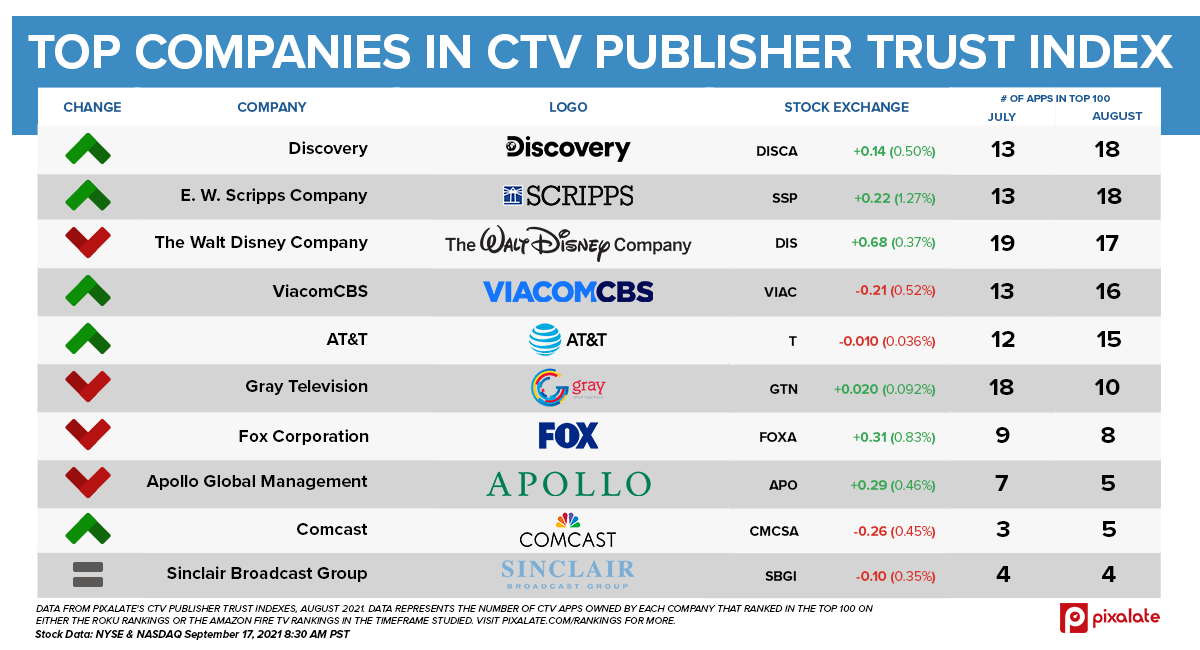 Discovery, Inc. (DISCA) and E. W. Scripps Company (SSP) were the leaders of publicly-traded companies which own the highest-quality apps for advertisers in August 2021, based on Pixalate’s analysis in our Publisher Trust Index.

To reach the No. 1 position, E. W. Scripps (SSP) advanced remarkably from the second straight month. The company had 4 apps in the top 100s in June, 13 in July, and finally 18 in August to become a leader of Pixalate's ranking. E. W. Scripps (SSP) focuses mainly on regional TV news stations, which distinguish themselves with extraordinary quality of advertising environment. The company's portfolio includes WTVF NewsChannel 5 Nashville, WXYZ 7 Action News Detroit, and Court TV, among others.

For Discovery (DISCA), this is its second time at the top after leading the way in May 2021. The company owns apps covering various topics, from science to home and garden. Discovery's portfolio includes Science Channel, Discovery GO, and HGTV GO, among others.

Three other publicly-traded companies were closely behind Discovery and E. W. Scripps, including:

Since the beginning of Pixalate's ranking, the number of apps owned by publicly traded companies has been higher for Amazon Fire TV’s top 100 apps than Roku. August was no different. There were 80 apps from the Amazon Fire TV top 100 owned by companies listed on stock exchanges compared to 49 for Roku.

Previous Story
← Over 2,000 Google Play Store apps with 1M+ downloads were delisted in H1 2021: Here are the most popular
Next Story
Thousands of Apple App Store apps were rated 1,000+ times prior to delisting →