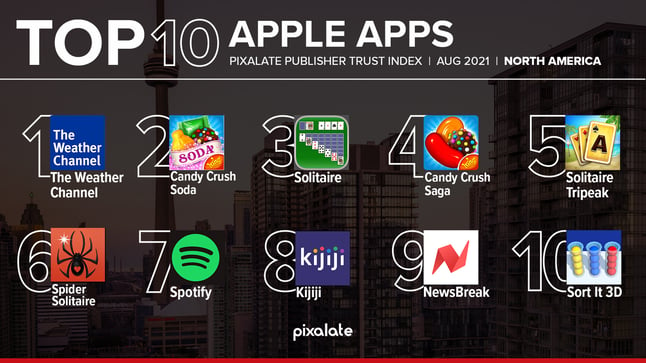 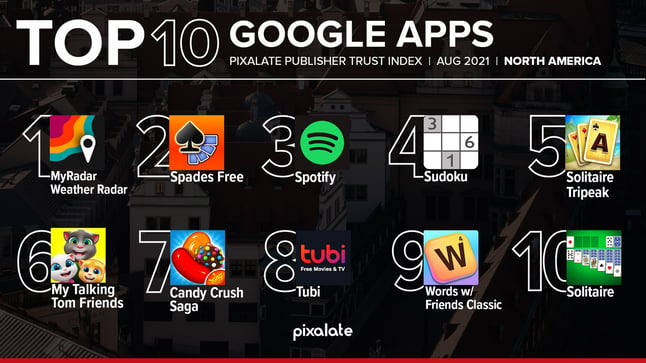 The Weather Channel’s consistency in delivering a quality advertising environment is of note. The app has not fallen from the No. 1 position in the Apple App Store ranking since the launch of the Publisher Trust Index in April 2021. The Weather Channel again performed remarkably across all measured metrics, including Viewability and Brand Safety, where it earned the highest possible score of 99. In addition, the app demonstrated a low chance of Brand Safety risks based on Pixalate’s analysis of its Description and Content.

MyRadar also has an impressive streak of the No. 1 positions in the Google Play Store rankings. The app obtained the highest possible mark (“A”) across all measured metrics, including Permission Score and Ads.Txt compliance. With an estimated inventory of 575 million monthly impressions, according to Pixalate, MyRadar demonstrated a low risk for various types of ad fraud, including spoofing and location masking.

There are more quality mobile apps for advertisers in August 2021

One of them is Tubi. The free movie app cracked the top 10 of Google Play Store ranking for the first time since May. Tubi performed well across all measured metrics, including high scores in Popularity (96) and Viewability (99). With an estimated monthly reach estimated at 7 million, according to Pixalate, estimated programmatic ad spend within the mobile app reached $405k in August 2021 in North America, per Pixalate.