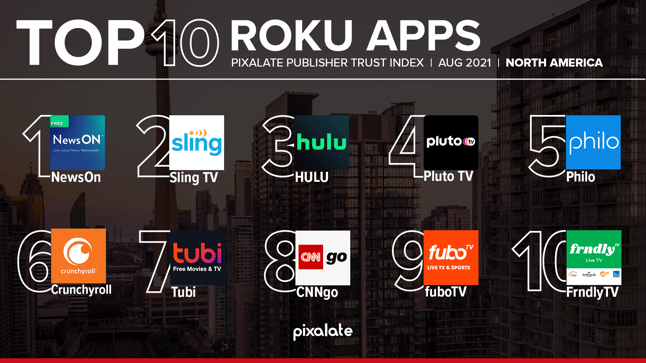 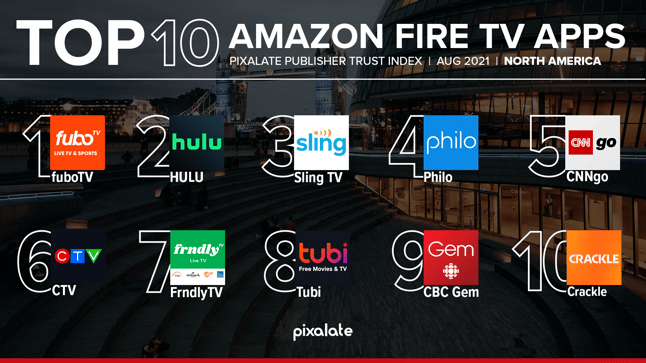 NewsOn and fuboTV excelled in the CTV Publisher Trust Indexes to reach the top position in the Roku and Amazon Fire TV classifications, respectively. Both apps earned this distinction for the first time since the launch of Publisher Trust Index in April 2021. They broke the domination of Sling TV and Hulu, which occupied the No. 1 position in the CTV rankings since May in North America.

After reaching the top 3 on the Roku ranking in July, NewsOn continued its march to reach the top position in August in North America. The news app earned it by excellent and consistent performance across all measured metrics and obtained the highest grade (“A”) in all categories, including Popularity, Invalid Traffic (IVT), and Ad Density. With 10 million estimated monthly Reach, NewsOn poses low advertising IVT risk, according to Pixalate’s analysis.

fuboTV led the Amazon Fire TV classification in August with an excellent performance, scoring at least 95 across all measured metrics, including Invalid Traffic and Engagement. Interestingly, Pixalate estimated that fuboTV is significantly relying on SSAI and delivers 99.7% of its ads via this technology with remarkable results in ad quality.

There are more quality apps for advertisers

There are more apps in the Pixalate Publisher Trust Index valuable for advertisers. It is worth noting that FrndlyTV secured top 10 places in both Roku and Amazon Fire TV rankings in August in North America. The app achieved that by versatile performance across all measured metrics, particularly Invalid Traffic. With an  IVT Score of 96, FrndlyTV ranked No. 1 in this metric among all CTV apps in the top 10 of both classifications.