December 21, 2022 — By: Craig Silverman and Ruth Talbot for ProPublica

Pixalate is featured in ProPublica's comprehensive examination of Google's online advertising ecosystem and problems that have arisen from what ProPublica calls the "Black Box Ad Empire."

As part of its investigation, ProPublica examined an ad company called PapayAds. Here's what ProPublica wrote:

ProPublica and Pixalate worked together to investigate ad transactions linked to PapayAds. Pixalate's findings are highlighted by ProPublica: 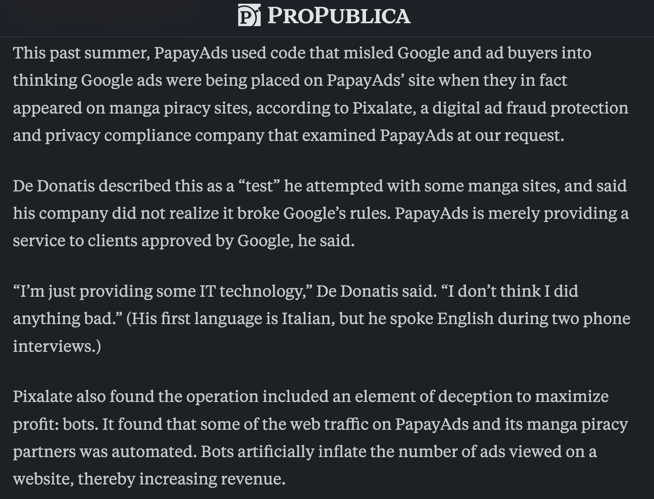 ProPublica added: "Pixalate’s findings did not attribute the automated traffic to a particular entity. It’s possible the bot activity was connected to PapayAds’ clients or another entity."

Pixalate also noted that PapayAds did not have a privacy policy (one has since been added), and Pixalate CEO Jalal Nasir expressed concern over Google's diligence.

Read the whole article on ProPublica.