Over half of the top 100 CTV apps for programmatic advertising are owned by public companies, with Disney and Discovery leading the way: May 2021 Rankings 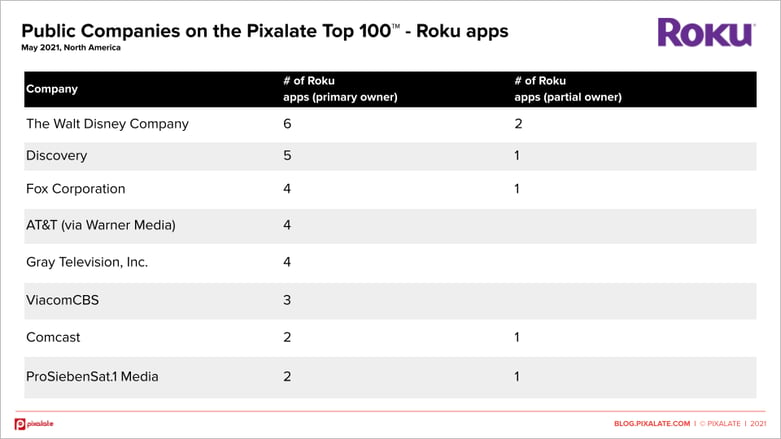 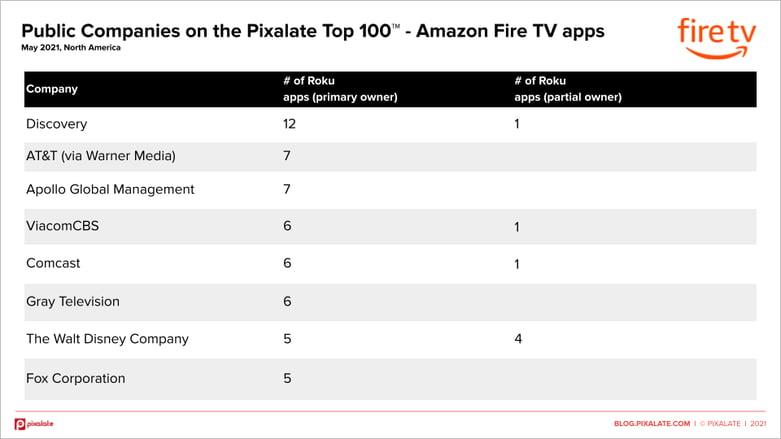 The Walt Disney Company (DIS) and Discovery, Inc. (DISCA) own the most apps in the Pixalate Top 100™ for CTV apps in May 2021 in North America.

Disney achieved the first spot in the Roku ranking with 6 apps in the top 100, including Philo (DIS, DISCA, AMCX, VIAC). Among Disney’s other representatives in the Pixalate Top 100™ are Hulu , ESPN, and ABC News Live.

Discovery (DISCA) apps dominated the Amazon Fire TV rankings. The company is the owner of 12 Fire TV apps and a minority stakeholder in one other. In Discovery’s portfolio, we can find channels such as Discovery GO, Animal Planet GO, and Watch OWN.

Among the top 100 apps for programmatic ad quality on Roku devices, 43 are owned by publicly traded companies. On the Amazon Fire TV app store, public companies own 73 of the top 100 apps in Pixalate’s May 2021 rankings in North America.

Interestingly, for the April 2021 rankings, the number of apps from publicly owned companies was higher on Roku, at 49.  We will continue to monitor this trend.

fuboTV holds its own against multinational conglomerates

FuboTV (FUBO) is the only CTV app that debuted on the stock market under its own name and earned a spot in the Pixalate Top 100™ in May 2021 on both the Roku and Amazon Fire TV rankings. With a portfolio of one app, the company successfully vies with larger competitors and ranks high in Pixalate’s assessment of overall programmatic ad quality on both platforms.