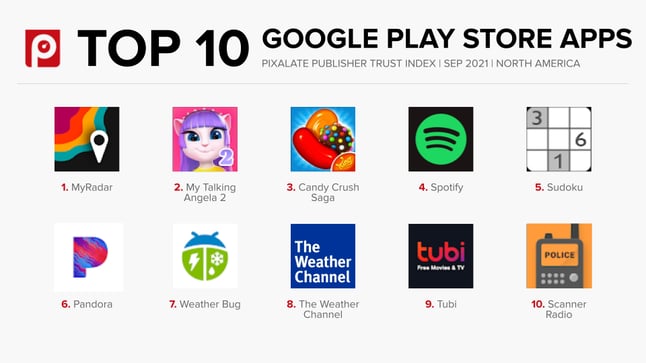 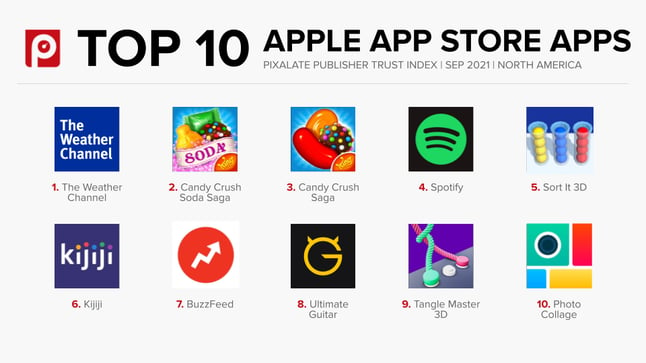 For the fourth month in a row, the status quo in mobile Publisher Trust Indexes in North America has been maintained. Again, MyRadar and The Weather Channel were the leaders of the best apps for overall programmatic ad quality in the Google Play Store and Apple App Store, respectively.

The Weather Channel has not lost the top position in the Apple App Store ranking since Pixalate launched the Publisher Trust Index in April 2021. Outstanding ad quality across all measured metrics gave the app the No. 1 position again. The Weather Channel performed particularly well in the Invalid Traffic (IVT) and Brand Safety categories. Moreover, it is the only app in September 2021 present in the top 10 of both mobile rankings (Google and Apple app stores) of the best quality apps for advertisers.

In the Google Play Store classification, the leader also remained the same. MyRadar, for the fourth time in a row, led the ranking with excellent results across all measured metrics, including Permissions and Viewability scores. Moreover, MyRadar indicated low across all categories in the Description Brand Safety metrics.

There are more quality apps for advertisers

Pandora is one of them. The streaming music and podcast platform debuted in the top 10 of the Google Play Store Publisher Trust Index with a quality performance across most measured metrics. Pandora performed particularly well in the Invalid Traffic and Permissions categories.