Pixalate released the Children’s Privacy Index for Mobile Advertising Sellers in August 2022, the first industry measure for impressions on apps that are likely child-directed within various sellers across the programmatic ecosystem.

The monthly index benchmarks Supply-Side Platforms (SSPs) based on the percentage of ads they sell on apps that are likely child-directed, as assessed by Pixalate’s COPPA Methodology. In this series, Pixalate highlights monthly trends as it relates to the overall seller ecosystem, not any one particular seller. 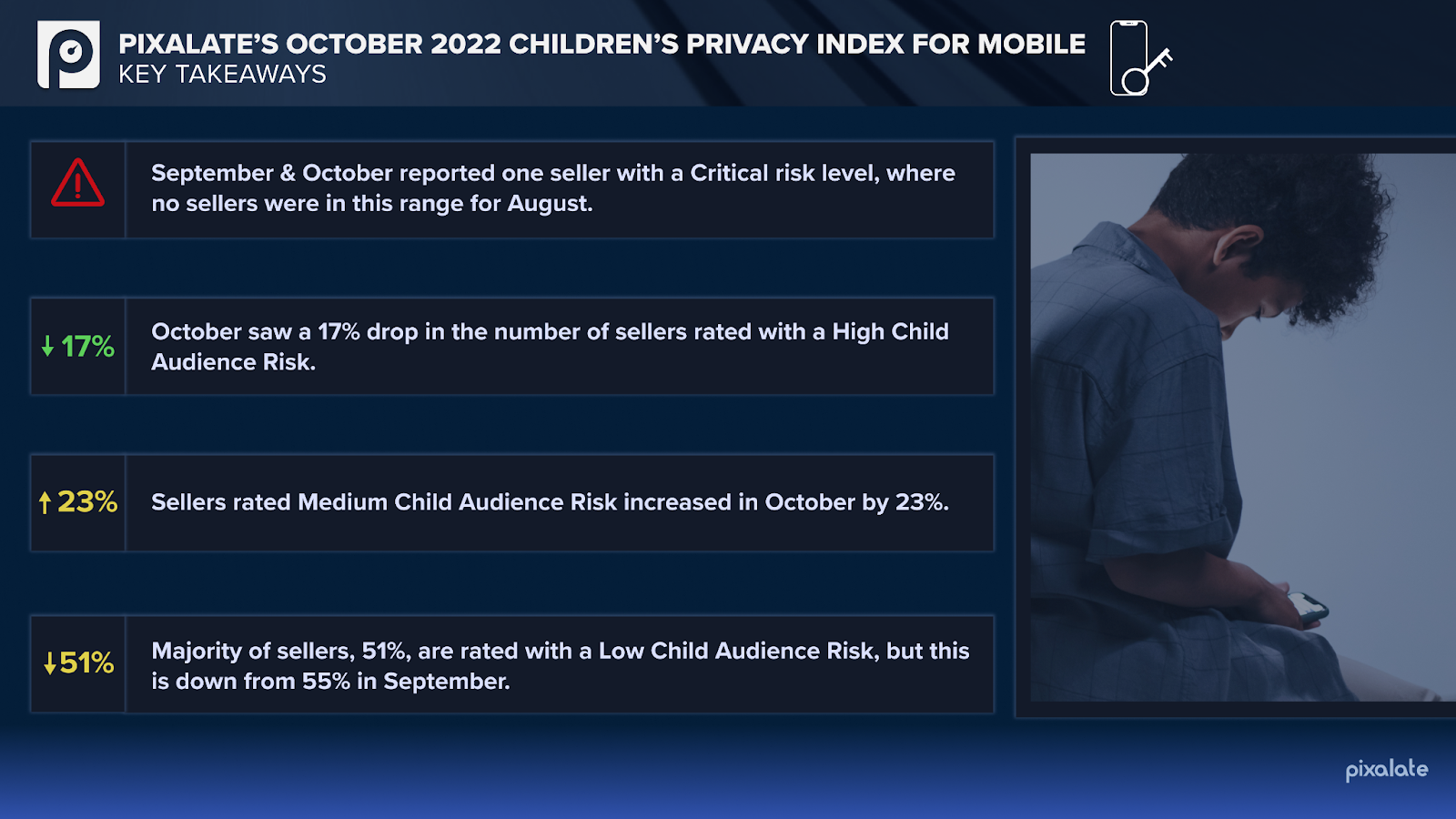 What is COPPA - and why it matters for advertisers

For nearly 25 years, the privacy of children in the U.S. has been governed by COPPA and its implementing Rule, which has come under scrutiny as regulators aim to address its application in today’s complex advertising ecosystem.

COPPA bars the collection of data from children under 13 without verified parental consent. Advertisers, ad buyers, and sellers are at risk of collecting childrens’ personal data from apps not clearly labeled as child-directed in the app stores. Google & Apple are well positioned, as the gatekeepers to the app stores, to provide clarity yet they do not require developers of apps targeting children to identify as such nor do they prominently feature that information in the app stores. Doing so would not only help parents protect their children online, but would also enable ad tech companies in complying with COPPA.

Pixalate uses automated processing derived from a combination of signals to determine if an app is likely to be child-directed, including the app’s category, sub-category, content rating, and contextual signals (specifically, child-related keywords in app’s title or the app’s description). Pixalate also leverages manual app review by educators on Pixalate’s Trust & Safety Advisory Board, who make assessments of apps based on the child-directed factors outlined in the COPPA Rule. See our full methodology for more information.

The content of this blog post, and the Children’s Privacy Index for Mobile Advertising, reflects Pixalate's opinions with respect to factors that Pixalate believes may be useful to the digital media industry. It is important to note, however, that a seller’s rating on the Children's Privacy  Index for Mobile Advertising does not mean that the seller is failing to comply with COPPA. Further, with respect to apps that appear to be child-directed and have characteristics that, in Pixalate’s opinion, may trigger related privacy obligations and/or risk, such assertions reflect Pixalate’s opinions (i.e., they are neither facts nor guarantees); and, although Pixalate’s methodologies used to render such opinions are derived from automated processing and at times coupled with human intervention, no assurances can be – or are – given by Pixalate with respect to the accuracy of any such opinions. Neither this blog post nor the Children’s Privacy  Index for Mobile Advertising are intended to impugn the standing or reputation of any entity, person or app, but instead, to report findings and apparent trends.