Words With Friends 2 leads the Video Gaming category of the July 2021 Mobile Publisher Trust Index; A Star Software and AI Factory with three representatives in the top 10 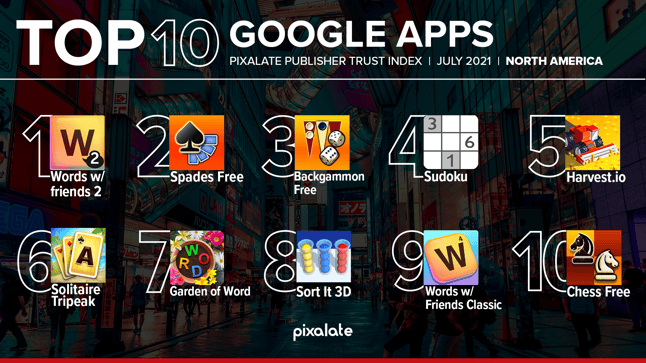 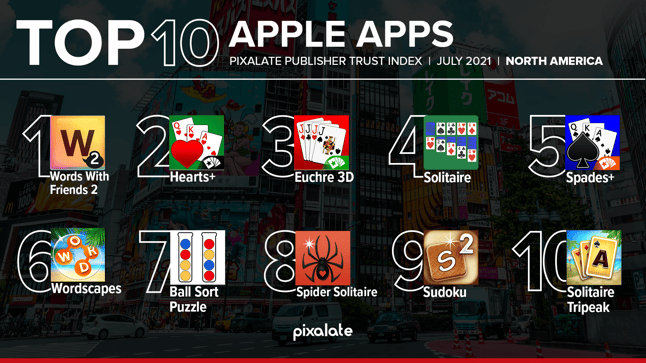 Words With Friends 2 by Zynga again topped the Publisher Trust Index in the Video Gaming category for both the Google Play Store and Apple App Store rankings. The app performed well across all measured metrics, particularly Ads.txt and Popularity, where Words With Friends 2 obtained the highest grade (“A”) in both the Google Play and Apple App Store rankings.

Additionally, two different developers had three apps ranked in the top 10. A Star Software — with Hearts+, Euchre 3D, and Spades+ — ranked in the top 10 of the Apple App Store ranking. All mentioned apps distinguished themselves with remarkable scores across all metrics, including Invalid Traffic (IVT), where they scored at least 90.

AI Factory Limited also obtained a similar achievement, but in Google Play Store classification. AI Factory Limited’s Spades Free, Backgammon Free, and Chess Free reached the top 10 of the Google Play ranking. The apps stood out with excellent scores across all metrics, particularly Brand Safety and Viewability, where they achieved a maximum score of 99.