Mobile and video are driving digital ad growth, but they’re also the riskiest for ad fraud

Last week, the Pixalate blog covered eMarketer’s latest Digital Ad Spending report, which projected that digital advertising will account for about half of global ad spend for the first time ever this year. Yet, Pixalate data also shows that ad fraud is keeping pace with digital ad growth, presenting both opportunities and challenges for advertisers.

As we dive further into the data, we see that video and mobile are driving this growth in digital ad spend. Not surprisingly, the fraudsters are following the money and hitting video and mobile the hardest.

Video and mobile are key growth drivers, per eMarketer

The main driver of digital growth is clear. eMarketer states, "Video will continue to be the major driver of growth”. The convergence of video sources is a major factor in the growth we’re seeing. Consumers across the U.S. are making it clear that they don’t care where they watch video, switching between traditional TV, streaming video, watching on social media, and more. In fact, the eMarketer report says “OTT video ad spending is growing faster than we previously thought, and a good share of those impressions are happening on connected TVs”. Advertisers are betting on video this year, and the odds are good that doing so will help advertisers meet their audience where they are spending their time - watching video.

Another place consumers are (still) spending their time is on mobile devices. The steady increase in spend on mobile advertising reflects this continued trend. "In another first, US mobile ad spending will account for more than one-third (36.5%) of total media ad spending in 2019, or $87.06 billion”, according to eMarketer. Mobile ad spend has been a consistent portion of digital budgets for several years now and there’s no end in sight. 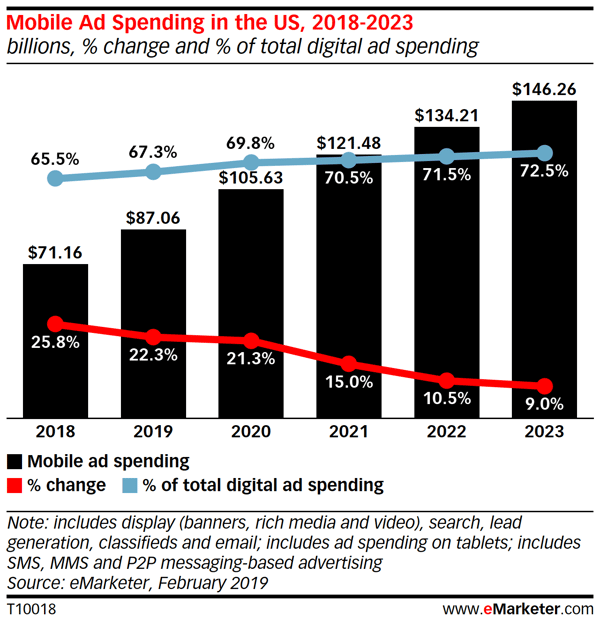 In a troublesome reminder of the sophistication of fraudsters, we once again see ad fraud rise in lockstep with brand budgets. Pixalate’s Q4 Ad Fraud Report 2018 shows that the highest ad fraud risk can be found at the intersection of video and mobile. In-app video advertising has ad fraud rates much higher than any other video ad environment - Video IVT rates in-app are up to nearly 30%!

The eMarketer report shows that mobile is a lucrative advertising channel, now accounting for over one-third of all digital ad spend and rising. Yet, ad fraud is also increasing across mobile devices. Mobile in-app ad fraud grew by 33% in Q4 - from 17.1% to 22.7%. This may be due to a surge in holiday ad spend, which attracted fraudsters and made them more active. How much of eMarketer’s projected $87.06 billion in mobile advertising dollars will be wasted on ad fraud? This should be a major concern for the entire industry.

Pixalate has consistently found a strong correlation between ad fraud and ad spend. This indicates that anytime advertising spend benchmarks are released, fraud should be considered when interpreting the data. Pixalate monitors over 10 billion device IDs, more than 38 types of invalid traffic, and is the only Media Ratings Council (MRC) accredited company to help prevent ad fraud across desktop, mobile, OTT and CTV.

With ad fraud rates in the double digits across nearly all devices and channels every quarter, advertisers need to take a comprehensive approach to protecting their ad spend from fraudsters. To take a deeper dive into ad fraud across all channels, including video and mobile, which are driving digital ad budgets - Schedule a demo and learn more about our ad fraud solutions.

These Stories on Trends