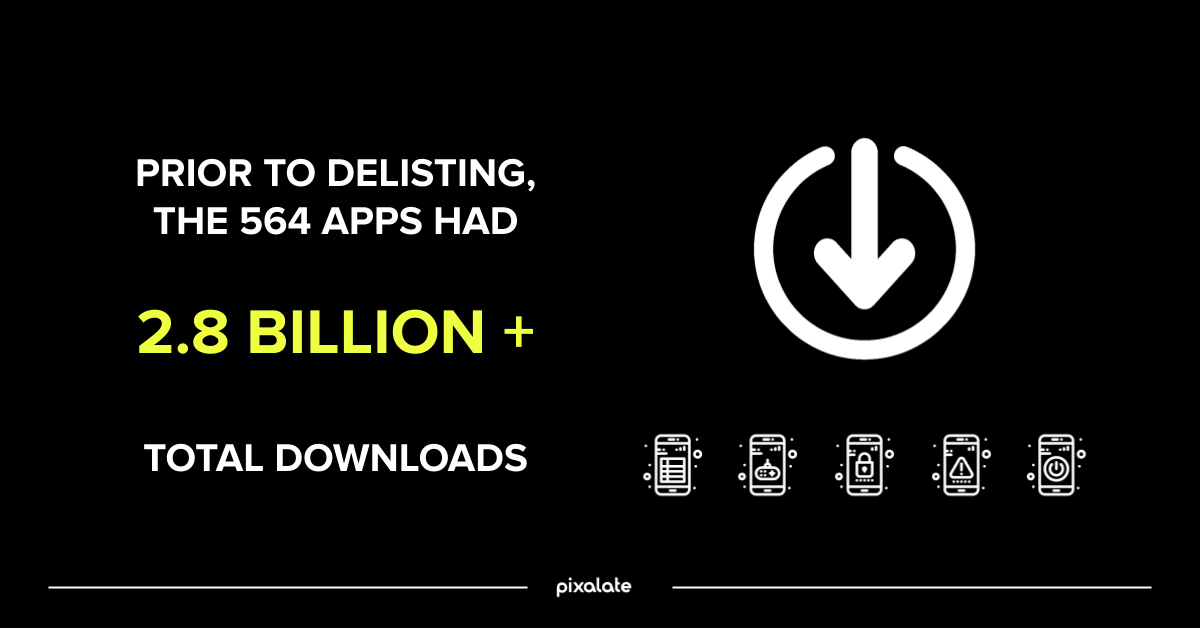 BuzzFeed News reported that Google delisted hundreds of apps for “disruptive” ads. However, until now, Cheetah Mobile was the only developer known to have been removed from the Play Store as a result of Google’s decision to clamp down on “disruptive” ads.

Pixalate’s research team has uncovered 564 apps that have characteristics that appear to be consistent with apps removed due to “disruptive” ads. In our list of 564 apps, developers with at least one such app had all of their apps removed (even if the developer’s other apps did not contain ads).

These findings are based on Pixalate’s data and research of apps delisted between February 10-20, 2020.

What you need to know

The 10 most popular apps delisted

All 10 of the top 10 most popular apps (based on minimum downloads prior to delisting) that appear to have been delisted in the time frame studied were from developers affiliated with Cheetah Mobile. 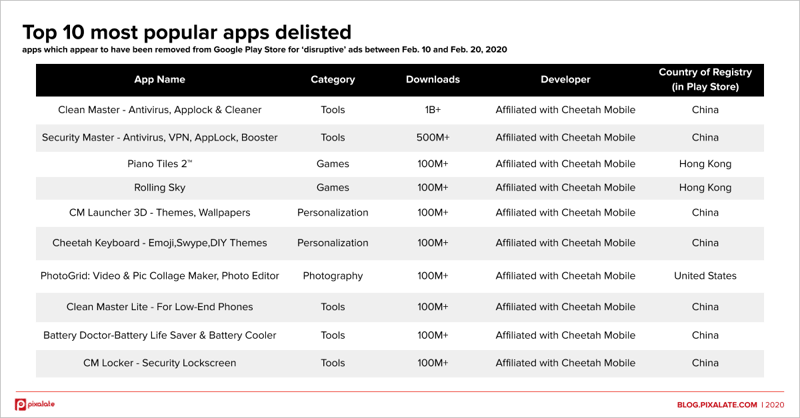 All of these apps have over 100 million downloads, including one app with 500M+ and another with over 1 billion.

The 564 delisted apps had over 2.8 billion downloads

In total, the 564 apps Pixalate identified had been downloaded at least 2.8 billion times, based on Google Play Store data.

Where did the apps come from? ‘No Country Listed,’ Poland, U.K. lead the way

Here is where the 564 apps were registered:

China was listed as the country of registry for 35 of the apps, and Hong Kong was listed on 22 of the apps. Russian apps accounted for 32 of the delistings, while India had 26.

The most popular delisted apps were from China, the U.S., and Poland

The vast majority of the most popular apps among these 564 came from Chinese developers. Of the 2.8 billion minimum downloads the apps had prior to delisting, 2 billion were from Chinese apps: 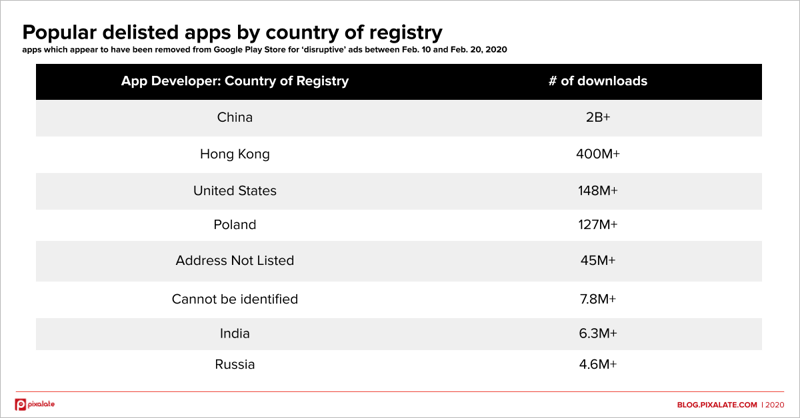 Note that some global companies, such as Cheetah Mobile, have apps registered in multiple countries.

The 10 most popular app developers that had apps removed

Below are the top 10 app developers, based on the number of downloads, among the 564 apps observed. 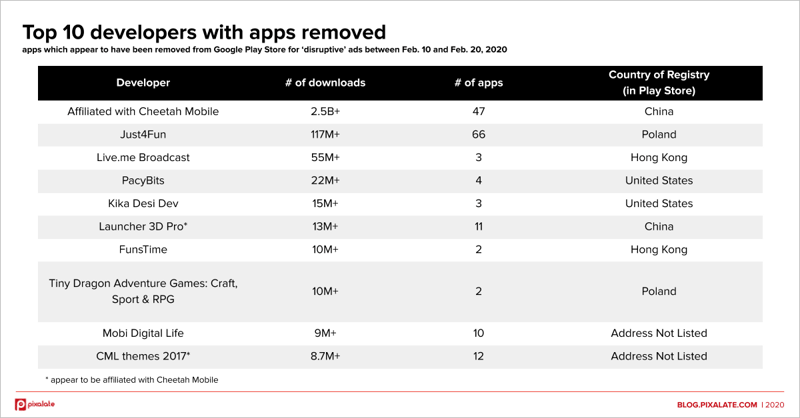 According to Pixalate’s researchers, Launcher 3D Pro and CML themes 2017 appear to be affiliated with Cheetah Mobile as well.

These permissions could have played a role in how the apps were able to generate “disruptive” ads. Here’s how Google defines “disruptive ads” in their blog:

“We define disruptive ads as ads that are displayed to users in unexpected ways, including impairing or interfering with the usability of device functions. While they can occur in-app, one form of disruptive ads we’ve seen on the rise is something we call out-of-context ads, which is when malicious developers serve ads on a mobile device when the user is not actually active in their app.”

Below is an example of the System_Alert_Window permission in use:

Of these 564 removed apps, here are the top 10 app categories that had the most apps delisted: 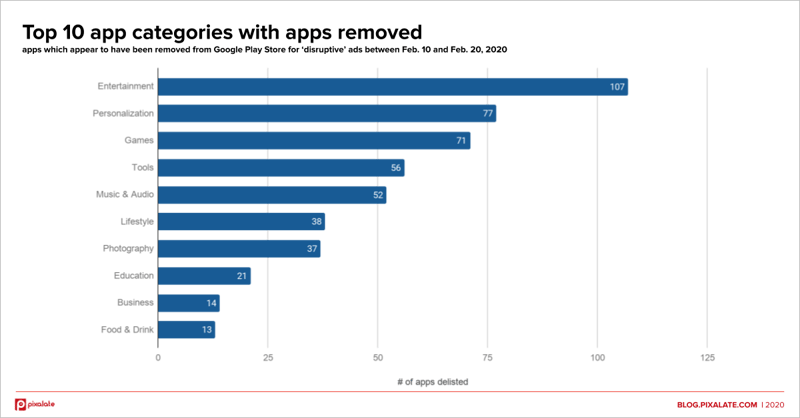 The above-referenced data is based on Pixalate’s research into apps, and associated developers, we believe may have been delisted between February 10-20, 2020, for having apps with characteristics that appear to be consistent with “disruptive” ads. Pixalate’s research stemmed from action taken by Google and reported on by BuzzFeed News, among other outlets.

Pixalate examined apps and their associated data using its proprietary research, data-grounded logic, and information shared by Google and BuzzFeed News in their respective posts, to form an opinion regarding whether a removed app was likely due to the presence of “disruptive” ads.

All 564 apps researched by Pixalate, and their developers, were removed from the Play Store as of March 2, 2020, with both the app and developer pages leading to a 404 response. In this list of 564 apps, if a developer had at least one app removed with characteristics appearing to be consistent with “disruptive” ads, then all of the developer’s apps were removed, even if other apps did not contain ads.

The content of this post reflects Pixalate’s opinions with respect to factors that Pixalate believes may be useful to the digital media industry. Any proprietary data shared is grounded in Pixalate’s proprietary technology and analytics, which Pixalate is continuously evaluating and updating. Any references to outside sources should not be construed as endorsements. Pixalate’s opinions are just that, opinions, which means that they are neither facts nor guarantees.