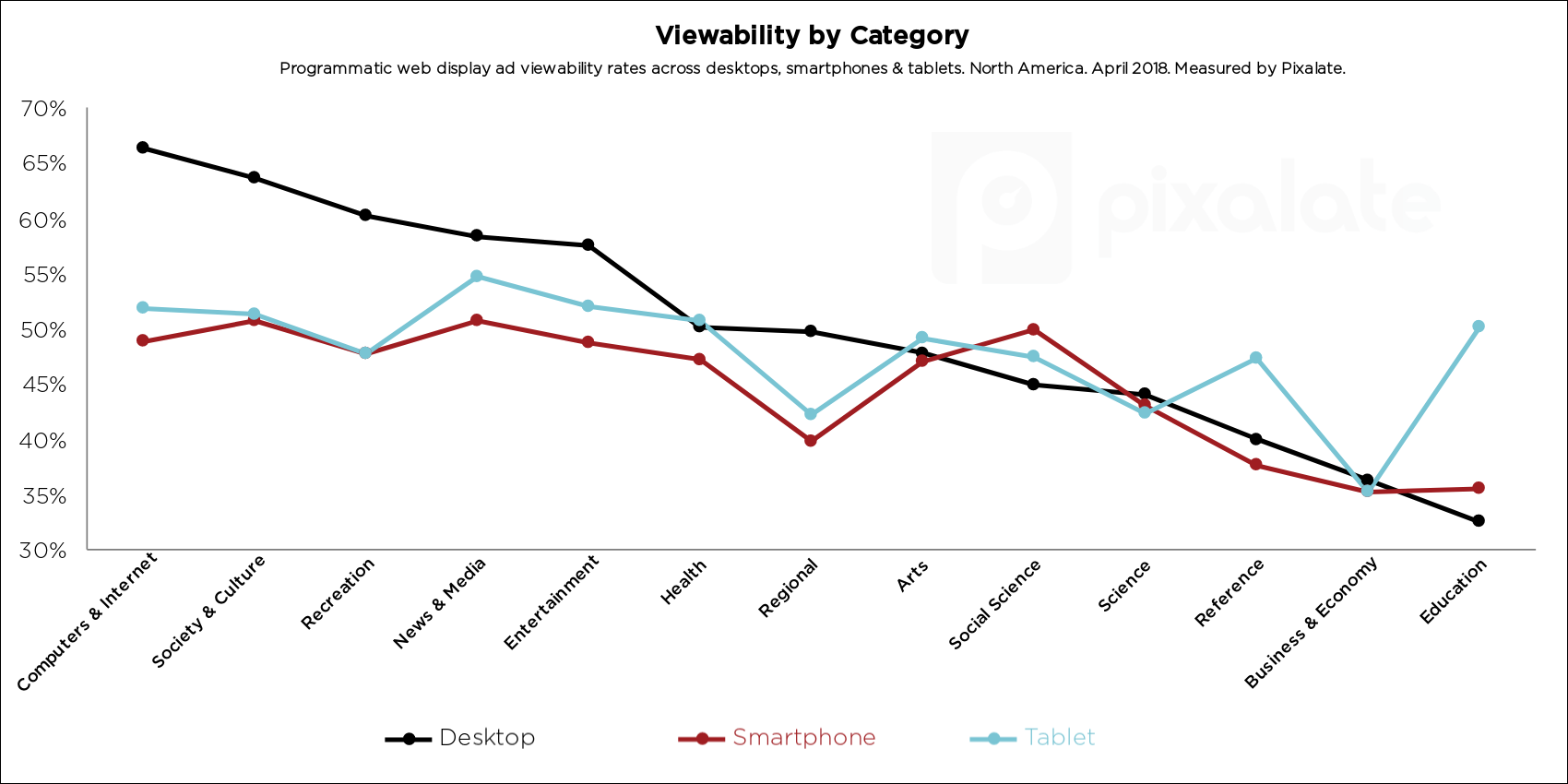 The state of viewability in programmatic: Q2 2018

Pixalate is continuing its analysis of the state of traffic quality in programmatic in Q2 2018 with a look at viewability rates across desktops, smartphones, and tablets across North America. You can download our comprehensive Q2 2018 Programmatic Quality Report here.

Per the Media Rating Council (MRC) standard, an ad is considered “viewable” if at least 50% of its pixels are in-view for at least 1 continuous second (or 2 continuous seconds for video). You can learn more about the standard here.

According to a 2017 World Federation of Advertisers (WFA) study, display viewability rates (globally) were just under 50%. It is important to note, however, that viewability rates can fluctuate on a quarter-to-quarter or even month-to-month basis. Pixalate will continue to track these trends.

Pixalate examined display ad viewability rates, as well as ad share of voice (“SOV”), on desktop, smartphone, and tablet devices across common publisher categories to compile this research. Invalid traffic (“IVT”) was removed prior to measurement.

Society & Culture (10.1% SOV), Recreation (9.3%), and Computers & Internet (8.1%) rounded out the top five desktop categories in terms of SOV. Overall, these five publisher categories accounted for just over 81% of the programmatic display ad marketplace on desktop devices.

However, it’s likely not a coincidence that categories that have high viewability rates also have high ad volume. Many marketers today seek inventory with high in-view rates, which will naturally cause them to favor publisher categories that offer above-average viewability.

From the publishers’ perspective, if they have high traffic — and high ad volume — they are more incentivized to place their inventory above the fold or in other places that are likely to generate a strong viewability rate because higher viewability typically equates to bigger CPMs.

The News & Media publisher category had the highest ad SOV for smartphone web display advertising, at 42.7%. This is comparable to the News & Media category SOV for desktop display (41.1%).

Another interesting takeaway from the smartphone data, in comparison to the desktop data: The ad SOV for the Entertainment category is significantly higher on smartphones (20.7%) compared to desktops (13%).

It’s not a surprise that people want to be entertained when on their smartphones, but this data indicates that smartphone entertainment is not just found within apps — it has extended to the mobile web as well.

Tablet: News & Media accounts for nearly half of ad SOV — and it has the highest viewability rate

Not only does the News & Media category account for nearly half of tablet display web advertising, but it also has the highest viewability rate on tablets, at 54.7%.

When it comes to viewability rates based on publisher category, there is strong correlation across devices

Pixalate examined viewability rates across various publisher categories on desktops, smartphones, and tablets to see how the rates compare based on category and device. What we discovered is that if a category is high-ranking in viewability on one device, odds are it will rank similarly on another device.

That’s not to say, however, that the device type doesn’t matter. For example, desktop devices had a very wide range in viewability based on publisher category, with the highest category registering an in-view rate of 66% and the lowest category at just 32% — less than half the amount. Smartphones and tablets did not have nearly as wide of a range.

Here are some ways marketers can put this viewability and category ad SOV data to use:

Pixalate analyzed billions of programmatic advertising impressions throughout April 2018 to compile the research contained herein. Pixalate utilized its proprietary algorithms to measure viewability levels across devices and channels. This data represents the North American programmatic marketplace. Geography is based on the User Pool (IP) and not the region of the domain. Categories of domains that had less than 100,000 impressions were removed from this study. The ad Share of Voice (“SOV”) is based off the remaining categories. Invalid traffic (“IVT”) was removed prior to measurement.