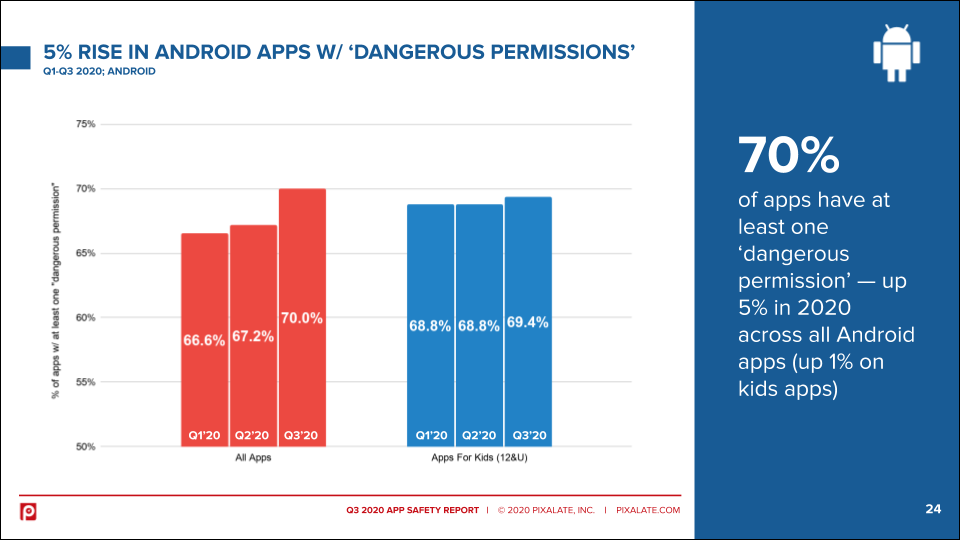 Pixalate's Mobile Ad Supply Chain: App Safety & Consumer Data Privacy Report (Q3 2020) reveals information about the 5.1+ million apps available to consumers across the Google Play and Apple App stores from Q1-Q3 2020 — with a specific look at apps for kids (aged 12 and under).

This blog examines the number of apps available on the Google Play Store that request any "dangerous permission" (as defined by Google), such as precise location access, access to the phone's camera or microphone, and more. location access (latitude and longitude GPS). 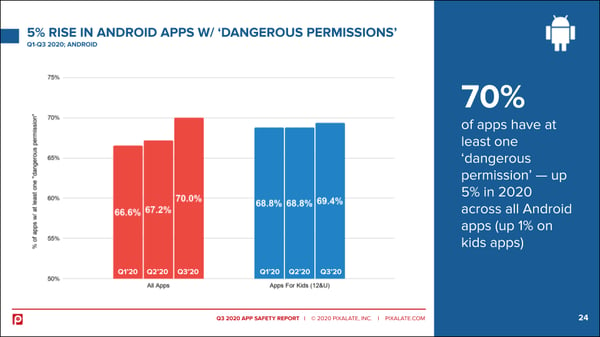 
What are some examples of 'dangerous permissions' on Android apps?

The content of this blog, and the Q3 2020 Mobile App Safety: Consumer Data Privacy Report (the "Report"), reflect Pixalate's opinions with respect to factors that Pixalate believes can be useful to the digital media industry. Any insights shared are grounded in Pixalate's proprietary technology and analytics, which Pixalate is continuously evaluating and updating. Any references to outside sources in the Report and herein should not be construed as endorsements. Pixalate's opinions are just that, opinions, which means that they are neither facts nor guarantees. It is important to also note that the mere fact that an app receives “dangerous permissions” (as defined by Google), does not appear to have a published registration address (or is registered in a traditional tax haven country), does not appear to have a privacy policy or terms of service, or appears to have other risk factors as set forth herein, does not necessarily mean that such app, or its publisher, is actually violating any particular law (e.g., COPPA) or is otherwise exploiting personal data. Instead, Pixalate is merely rendering an opinion that these facts may be suggestive of heightened risks to data subjects, especially with respect to children aged 12 and under. Pixalate is sharing this data not to impugn the standing or reputation of any entity, person or app, but, instead, to report facts as they pertain to Android and iOS apps.