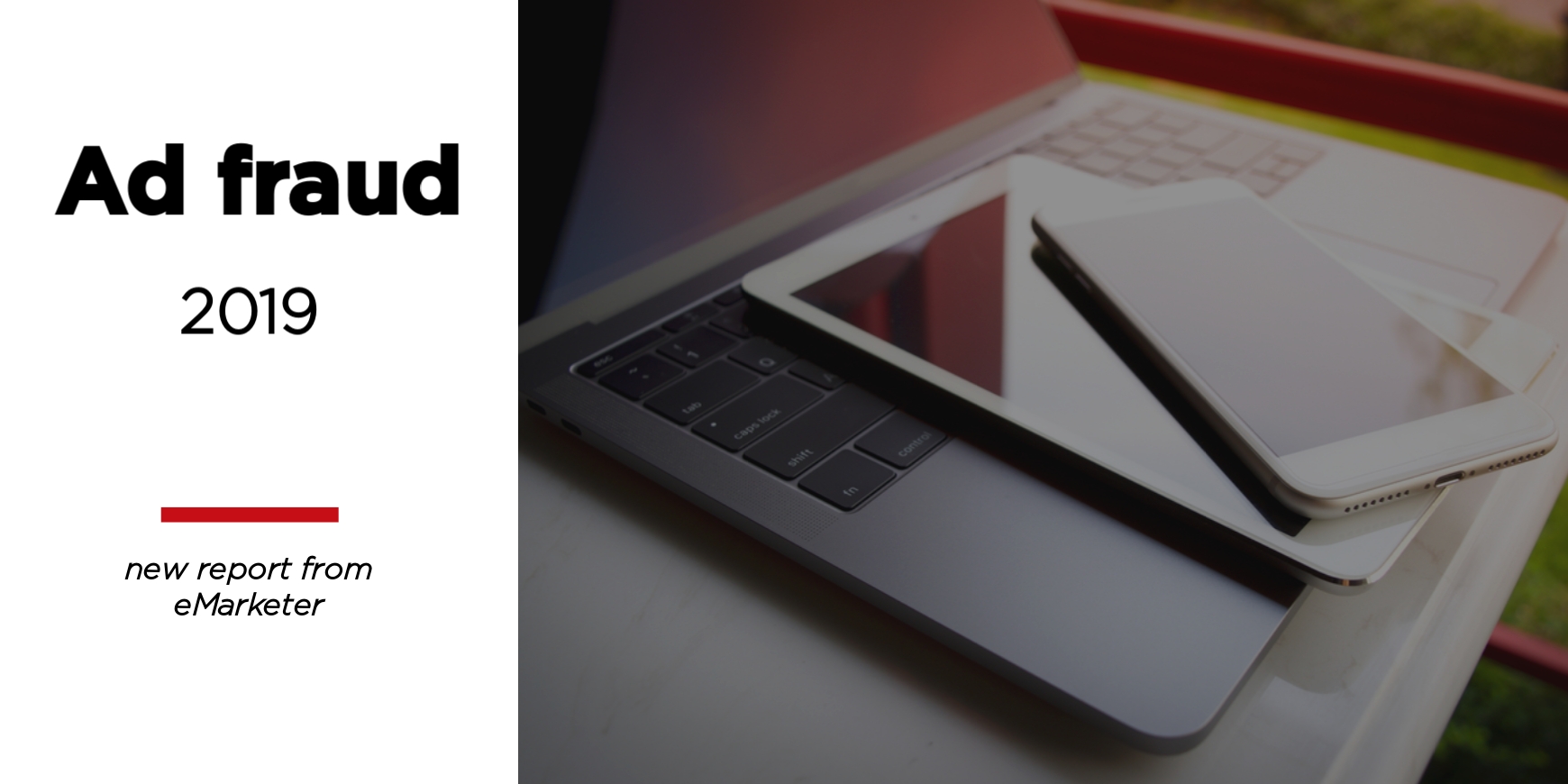 eMarketer recently released the Digital Ad Fraud 2019 report, noting that mobile and video are the riskiest channels for advertisers. The comprehensive report features everything you need to know about invalid traffic (IVT) and ad fraud in 2019, including the latest stats and estimates from Pixalate.

Ad fraud is a multi-billion dollar problem that has infiltrated every corner of the digital ad ecosystem, including desktop and mobile web, mobile in-app, and the rapidly expanding world of Connected TV/OTT.

Here’s a sampling of some of the topics covered in eMarketer’s robust report.

Connected TV/OTT ad fraud is the next challenge

eMarketer dedicates a section of its latest report to Connected TV/OTT ad fraud, an area of growing concern among marketers as CTV/OTT becomes a bigger part of campaign success. 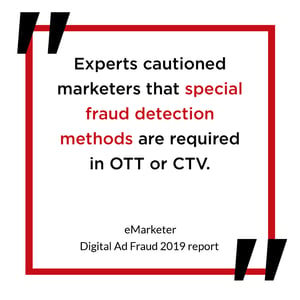 "In a Q3 2018 study, Pixalate found that 19% of worldwide OTT impressions were invalid, due to a combination of fraud and ad serving and measurement errors caused by technical malfunctions,” wrote eMarketer in a separate article focused on the growing threat of OTT ad fraud.

“Roku has its own store. Amazon has its own store. Xbox has its own store. A lot of the media companies have their own store,” Amy King, vice president product marketing at Pixalate, told eMarketer. “There is no standardization. There's no universal directory of what all of those apps should be called. So if you decide to make up fake apps and call them something very similar, it makes it very difficult to tell if that's invalid or fraudulent.”

The ad industry needs to prepare itself for the battle against ad fraud in CTV/OTT. To that end, Pixalate recently hosted a webinar featuring experts from RhythmOne, Telaria, and Bold Screen Media to dissect the OTT landscape and educate the marketplace on how to grow scale without sacrificing quality. Read the webinar recap.

Pixalate also released a comprehensive guide to OTT ad fraud in 2019, featuring more on the state of ad fraud in OTT, myths vs. realities, a breakdown of why OTT fraud schemes are harder to detect, and more.

"Experts cautioned marketers that special fraud detection methods are required in OTT or CTV,” the new eMarketer report says. Pixalate recently became the first (and currently only) company accredited by the MRC for the detection and filtration of video invalid traffic in OTT.

"For traditional display formats, desktop web and smartphone apps were the two channels most vulnerable to fraud,” the report reads, citing Pixalate data. "For video formats, smartphone and tablet apps were the riskiest places to buy.”

According to Pixalate’s Q3 2018 Ad Fraud report, smartphone app video (22%) and tablet app video (19%) had the highest video IVT rates. Those have been the two riskiest video channels for two straight quarters, proving that in-app advertising is a minefield of fraud and emphasizing the importance of working with a partner accredited for mobile in-app invalid traffic detection and filtration.

The industry pushes back: The state of ads.txt adoption

eMarketer’s 2019 Ad Fraud Report doesn’t just highlight the challenges. The report also makes note of the strides the industry has made the overall battle against ad fraud — specifically ads.txt, the IAB-led initiative that aims to reduce domain spoofing. 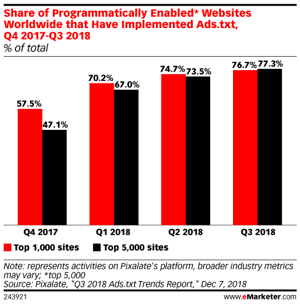 "[Ads.txt’s] implementation has probably been the single most important development in fraud mitigation efforts since our last report was published in mid-2017,” writes eMarketer. Per Pixalate’s Q3 2018 Ads.txt Trends Report, over three-fourths of leading programmatic publishes worldwide have implemented ads.txt.

eMarketer does caution, however, the ads.txt is not a one-stop-shop solution to all ad fraud. "Ads.txt doesn’t fix or fight all types of fraud—it’s limited to web environments, for one thing, and for another, it aims only to weed out domain spoofing and arbitrage,” the report notes.

Previous Story
← Mobile in-app transparency may finally be improving, at least among the top sellers
Next Story
Pixalate Week in Review: February 4 - 8, 2019 →